This post may contain affiliate links, which means I'll receive a commission if you purchase through my link, at no extra cost to you. Please read full disclosure here

Whether you’re planning to shoot videos for starting a profitable YouTube Channel that are share worthy? or learn to film for your own good?

Keep in mind that, a video is a very powerful medium that has a huge potential.

Lack of quality in your videos can lead to instant rejection. Just as in photography, videography also requires a bit of know-how.

But before that, get ready to upgrade! Choosing a good vlogging camera will give you better video quality, more options, and an all-around better vlogging experience is exciting. Here’s my choice of the best camera to simplify the selection process.

Canon EOS 70D comes in at around $1250-$1400+ (depending on the kit), though you may be able to find lower prices if you shop around online.This camera is a vast upgrade from the 60D, combining the best features of that body, the T5i, 6D, and 7D, with superior movie motion tracking. It’s a legitimate sports camera and the first DSLR I can recommend for amateur video without a caveat for slow autofocus. Mirrorless and hybrid bodies are still better at shooting stills from the rear LCD. With that increase in price, you can expect a lot more features and benefits, too, including:

To see all the Canon EOS 70D features, you can get more information here.

A really great thing about the Canon 70D is the live view auto-focus system. This is can be a huge difference maker for many vloggers. If you’re looking for very good video quality for your YouTube channel and vlogs, this is a great camera to go with. Besides that, it offers a lot more control, and you can buy interchangeable lenses for indoor, outdoor, nighttime, long-distance, and other shooting conditions.

While this camera does require a slightly higher budget, it is also more versatile and capable of much higher video quality. Whether that’s necessary for your YouTube channel is really up to you, though.

Also Read: 5 Best Vlogging Cameras for Youtubers on a Budget

Vlogging is not as easy as it looks, but not tough either. Luckily, I learned how.

So, Don’t worry – I got you covered with some cool tips that helped me unlock the basics of Vlogging and become a better videographer.

If you keep these tips in mind, you can also easily create your own beautiful videos, set them apart from the crowd and procrastinate your passion to the world. 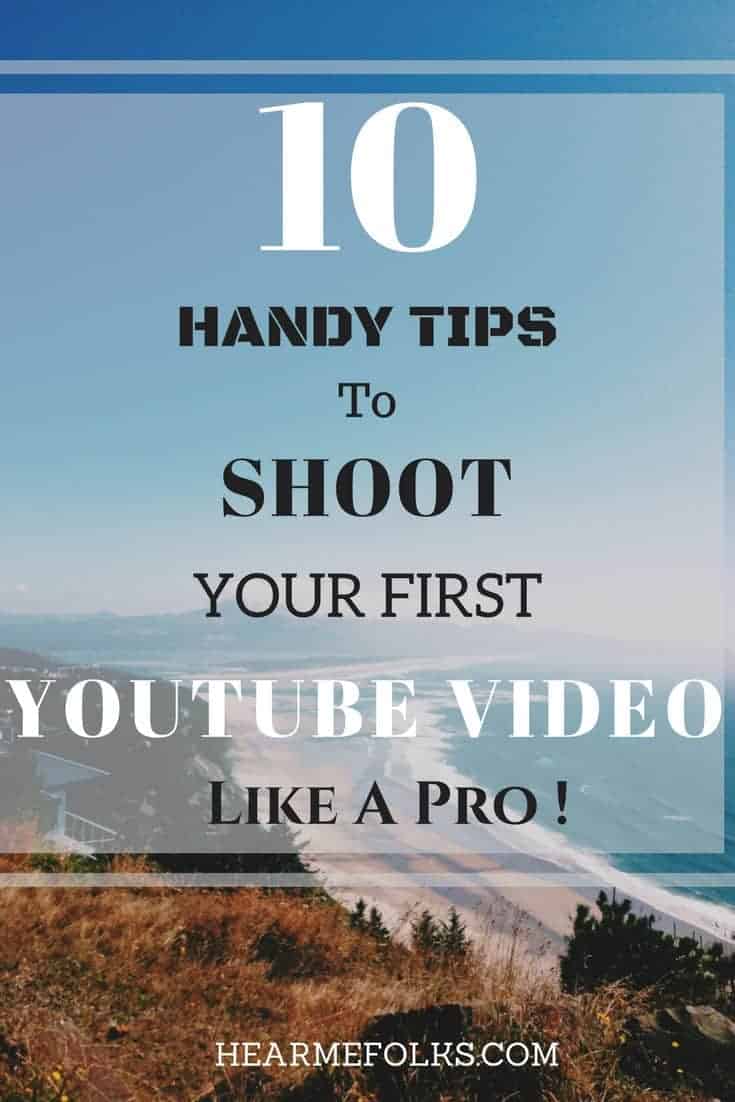 The classic beginner mistake is to shoot a wide shot of a scene, forgetting that video is an inherently close-up medium. For instance, the beginner will shoot a head-to-toe shot of a mom attending her baby. While, the professional will take a close shot on the baby’s face, with the mother’s adoring face staring at the baby in the background. So, you need to get in close, where the emotions happen. Likewise, If you’re shooting an interview, only use a two-shot. Concentrate on people’s faces, take a closer shot. It should be like two people talking to each other.

In the heat of shooting, you might not concentrate on the background. You might be immersed in capturing their expressions while watching what they’re doing. Only when you start editing, you notice the unpleasant background, you’ve overlooked.

Here’s a tip from a friend of mine who worked with Pro-directors in movie making.

Try to place your subjects in front of something that is more pleasing to the eyes like trees and potted plants.

A shaky video is no fun to watch. Whether you’re using a mobile or a video camera, mount it on a tripod. When shooting video while using a tripod, the image stabilization is active to compensate for slight camera shake. Unless otherwise, your camera compensates for image stabilization (only high-end cameras do) all types of movement for beautiful results, go for a tripod. Stabilizers and tripods allow you to keep your camera, smartphone or mobile device still when taking a video.

Canon’s PowerShot G7 X Mark II camera’s has advanced image stabilization, and panning mode can help you capture fast-moving subjects in an artistic and striking fashion. The combination of camera & tripod stand enables you to record photo and video for hours with minimum effort.

Tip: If a tripod or stabilizer is a little too costly, leaning against a wall will stabilize your shot to a certain extent. If you’re shooting with your smartphone, you can rest your phone on other physical supports like tables, chairs, desks, shelves, etc

4. Let there be Ample light

The difference between an amateur and professional video is having good light. The more light, the better it will look. Try to shoot outdoors to get as much light on the subject as possible and shoot during what the photographers call as the ‘The Golden Hour’. The hour right after sunrise and just before sunset, when the sun is lower in the sky. When the sun is directly overhead, it casts shadows on subjects’ faces.

Tip: Either carry a battery-operated light, set up lights wherever possible or shoot in brightly lit areas.

This Neewer CN-160 (160-LED Video lights) along with Camera Collapsible Diffuser Mini Softbox (Premium-grade reflective and diffusive material created for soft and even light coverage to remove shadow) are easy to install and use and will make a great addition to your video shooting, photography or studio for optimum illumination. It can be mounted to any standard hot shoe on most DSLR or digital video cameras as well as tripods and light stands.

Let talk about sound effects now. Unfortunately, your video automatically records all the sounds surrounding the scene and there is no way you can escape that. Try to get your subject(s) as close to the microphone as possible.

If you can afford, clip a wireless mic onto whoever is speaking, and at the same time, capture the sounds of everything that’s happening in the scene with the mic that’s on your camera.

If you’re using a smartphone to shoot the video using your hand to cover around the phone’s microphone (but don’t completely cover it). This way, unwanted noise can be reduced, which might minimize the disturbance.

Many audio and video editing Softwares like ‘Adobe Soundbooth Final Cut Pro X’ come with noise filters which help identify the noise and help remove it.

If you’re looking for a compact, lightweight on camera Microphone then Rode VMGO Video Mic GO can be your best bet, as it delivers clear, crisp, directional audio with incredible ease of use. Its tight pickup area focuses directly in front of the microphone, reduces other surrounding sounds and ensures that your subject is isolated from distracting background noise.It doesn’t require any battery and runs efficiently with the camera’s plug-in power. All you need to do is plug in and GO.

Zoom is done to get a closer shot of your subject. But before you do that, consider for yourself if you really need it? If you can’t think of a really good reason, don’t zoom or pan. If you must zoom or pan, do it slower than your instincts tell you to do. Turn off the digital zoom from within the camera’s menu system.

Why? No! Professional cameras like SLR & DSLR come with ‘Optical Zoom’, wherein the camera lens moves closer to the subject in order to capture a photo or a video. Whereas, smartphones make use of ‘Digital Zoom’, where instead of moving closer to the subject, it enlarges the image captured through the phone lens. As a result, your video looks, well, awful. Stick with your camera’s optical zoom, which relies solely on the lens for magnification.

7. Give a sufficient headroom

Another classic beginner mistake is the headroom misjudgment. There were many instances when I cut off my subject’s head while framing them in the viewfinder. You should be able to decide upon the amount of headroom required. Also, keep in mind, it’s inappropriate to give too much headroom. By doing so, your subject might be appearing like a miniature with tons of space above his/her head.

Canny photographers, follow the ‘Rule of Thirds‘ while shooting a video. According to Wikipedia, “The rule of thirds is applied by aligning a subject with the guidelines and their intersection points, placing the horizon on the top or bottom line, or allowing linear features in the image to flow from section to section. In simple, imagine a tic-tac-toe image over your viewfinder, the lines intersect at four points. As per the above rule, you should be able to frame your subject at one or more of those spots.

The main reason for observing the rule of thirds is to discourage placement of the subject at the center, or prevent a horizon from appearing to divide the picture in half.”

Here is a picture cropped without and with the rule of thirds!

B-roll is the extra footage captured to supplement the primary video to have greater flexibility when editing. B-roll can be anything like additional video footage, still photographs, animation or other graphic elements.

Most people don’t realize that they might need as much video when they’re shooting, but they actually end up needing when they’re editing. So, when you’re shooting something, stay on that shot about five seconds longer than you think you’ll need. That way, you’ll have more options in the edit session. For example: if your subject is talking about horse-riding, make the effort to get some shots of horses, people doing horse riding or something related. Shoot a lot. Allow yourself as many options as you have time to shoot. It’s “Better to have it and not need it than need it and not have it”.

Once you’re done with the shooting, you’ll need to learn to edit the entire footage into a short video around 5 mins. Editing is really easy too. The basic video editing software is included with Macs and PCs.

If you have a Windows PC, the most popular video editing software include Adobe Premiere Elements.

Windows XP and Windows Vista include a full-featured video editing program – and it’s free! The program is called Windows Movie Maker, but it’s not as sophisticated as the premier ones. It includes all the features you need to do basic home video editing.

Excellent video editing apps are now available for smartphones as well. You can even do video editing directly on Youtube interface and quickly upload them to your channel.

Try to keep your video short!

The good news is that the videos to be posted on Youtube, Vimeo or any Video hosting sites works best if simple. Keep in mind that, ideas are more important than technique when it comes to shooting videos for Youtube or for the web.

If you manage to imbibe these few basic concepts you can pretty surely improve your filming capabilities. What tips or advice would you give to other filmmakers who are yet to shoot videos for their YouTube channel? 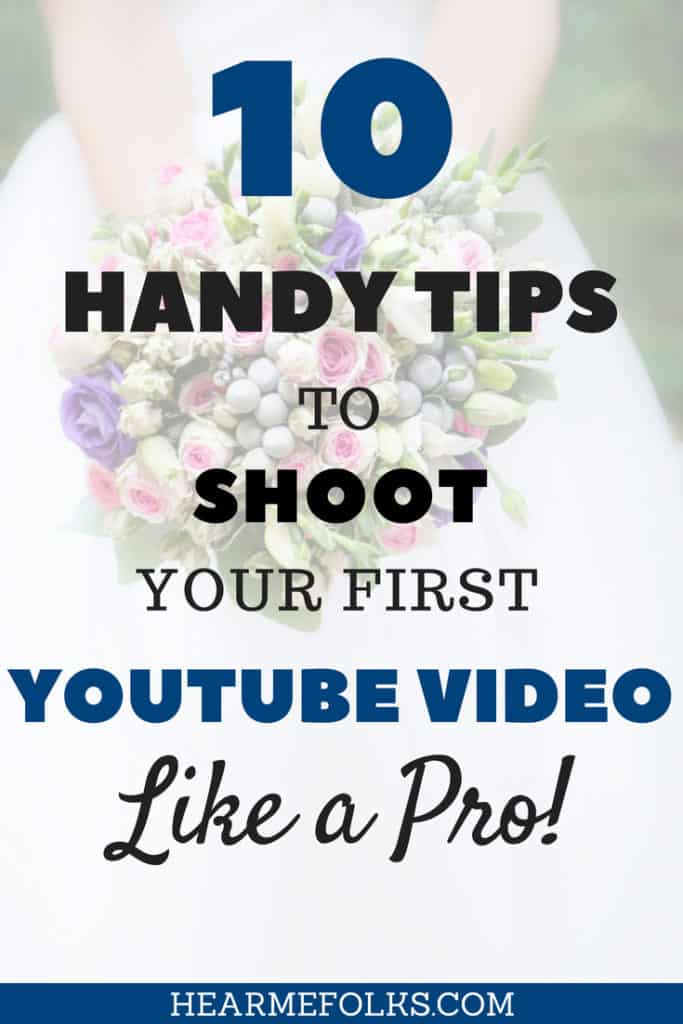 These are some great tipps! I would also mention to just record as much as necessary. In editing there is nothing more annoying than having to go through endlessly long clips. It makes it tiresome. Everything else is great! Definitely something I'll remember in the future!