When looking for successful ways to make quick cash, it is inevitable that you will encounter illegal side hustles.

This is especially true in the wake of the 2008 economic crash as well as the health pandemic affecting many people’s day-to-day life, including their jobs and how they make money.

As a large portion of jobs become unworkable and a large number of businesses are forced to close amid current events, and the economy continues to be unstable due to these unpredictable and unprecedented times, most people have acquired a side hustle or two for extra cash.

In fact, “side hustle” is basically just another term for a second job. If you want to dip your toe into those waters but do not know where to start, look no further!

We have the top illegal side hustles and quick cash crimes listed out which we don’t want you to take up at any cost! It should be noted that most of these illegal get rich quick schemes are prone to high risk, so keep that in mind. You usually stand to lose as much as you stand to gain.

In fact, there are easy jobs for everyone regardless of whether you are a kid, single-mom, or a retiree.

And while we do not condone illegal activities, there can be numerous benefits to understanding the real ways people make money illegally whether it be for personal research or your own protection.

How to Make a Million Dollars Instantly? 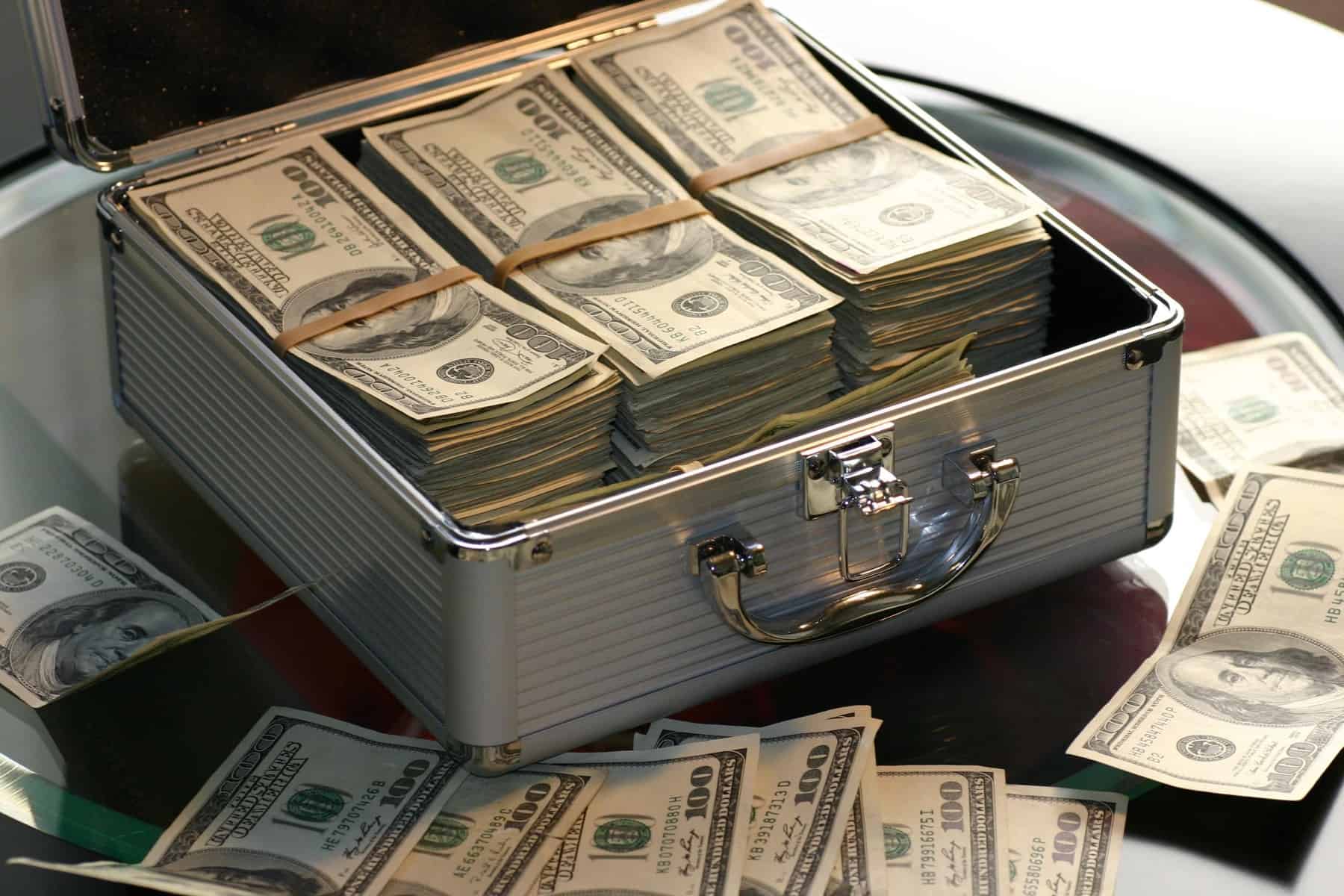 As you can probably guess, it is not easy to make millions of dollars instantly. High netting schemes are usually the ones that stand to cause you the most harm if done wrong. Stealing a $1 candy bar is less likely to get you jail time than stealing $10,000 from a company.

There are ways to do make huge sums of money but the risk is almost certainly higher the more money you are able to make. That being said, there are some dirty ways to make money and a lot of it.

Counterfeiting is currently the largest criminal enterprise in the world coming in as a $1.7 trillion industry.

Outside of fashion, rip off electronics, toys, cigarettes, and most dangerously pharmaceutical drugs are big objects of counterfeiting as well. The majority of pill overdoses can usually be traced back to counterfeit opioids.

Legally speaking, to embezzle money you must be entrusted with the funds you are stealing. If not, it is just theft. Whether you are a treasurer for a volunteer group, running the payroll for a large corporation, or work as a cashier, the opportunities to embezzle are endless, if you are willing to break that trust.

While funneling money in small increments that add up over time as a member of the billing department is a high-risk activity that could lead to your company suing, selling high priced office supplies as printer toner will likely only get you fired.

However, embezzlement is not that uncommon. It accounts for almost 2%, or $50 billion, of all retail sales and it called “shrinkage” in the retail industry. Gift cards are the number one target for this shrinkage.

At the height of selling drugs is Pablo Escobar, who made $22 billion a year selling cocaine. On a more manageable scale, the average part-time street sellers of marijuana make around $600 a week or $1200 a month.

Sports betting is a $3 trillion dollar industry that many people have gotten rich from hosting their own online daily fantasy sports.

Today, offshore sportsbooks have taken over so it is definitely harder to make it big but it is always possible.

Hacking is a very versatile profession that spans a large variety of digital activities. Many of these activities are both illegal and large money makers. We will break down the different ways to make money while hacking!

How Do Hackers Make Money Illegally?

Hacking is a very versatile activity. There are thousands of ways to make money digitally, but they require a knowledge of digital software and hardware. If you have a background in computer science or consider yourself a tech wiz, then hacking may be a great money-making opportunity for you. There are legal and illegal forms, as well as many, many different sneaky ways to make money.

In the middle, there are also grey hat hackers. A common tactic of grey hat hackers is to find a vulnerability in a company’s security software, and then ask for money in order to tell them what it is and fix it.

Desperate companies look to hire people to send out mass emails in a last-ditch attempt at advertising.

Some spambots are instead used to build databases of email addresses for future spam as well. Here’s how spammers make a lot of money!

This involves hackers use malware to get money from victims. Victim’s files are encrypted and in order to get their data back, they have to pay a ransom. The targets are usually large companies and small businesses.

Recently, I saw a Facebook post of a woman who transferred $8,000, equivalent to 1 bitcoin, to join an MLM company (which is actually fake) believing they would offer her a home-based job.

A few months ago, I myself came across an instance on Twitter about joining a popular stock optioneering program. The scammer created a fake Twitter account in the name of the actual guru, who many trust and revere.

Assuming it to be real, I blindly followed this fake account on Twitter. To my surprise, I instantly received a message to avail of a limited-time offer on their coaching program. It didn’t stop there. I constantly received messages wherein I was asked to transfer money in Bitcoin to join that coaching program. That’s when things got ugly! I realized that something is fishy and immediately unfollowed and reported the account.

So, be careful with such scammers guys. They are real and are on the rise! While there are many ways scammers seek to take advantage of Netizens, here are 5 Bitcoin Scams you must never get involved with!

How to Get Free Money Illegally?

Though you may not know it, there are a wide variety of quick cash crimes. These vary widely in the amount of money they can make you and how harsh the repercussions are if you are unsuccessful. But, before I proceed any further, let me tell you, there are many ways to make over $2000 in free money (legally) or an extra clever $80 legally. If you need $500 instantly, that’s doable too! So think twice!!

If you are ballsy, there is a fantastic illegal side hustle from Reddit about how to easily rob a bank. One user reported that he would walk into banks and hand the teller a paper note that just said “give me all your $50s and $100s.” The tellers complied because large bank robberies that go south cost lots of more money than just handing over some cash.

Counting cards is not technically illegal as long as no external device or person is used, but it is heavily frowned upon. Still, counting cards can make you a hefty profit.

By counting cards, you can decrease the house advantage and profit by 1.5% on every hand. This allows you to average $75 per hour.

You can grow poppies or coca for profit, but those are very likely to get you caught. Cannabis, however, is barely even a drug. It is legal in many states recreationally and many more still for medicinal purposes. Still, growing it for distribution is still considered an illicit trade.

Another dirty way to make money is by acting as a drug mule to sneak drugs over the border.

Only 13% of 2.5 million burglaries a year get solved. After a burglary, you can sell items on eBay, Craigslist, and selling apps like OfferUp. Cell phones are perhaps the easiest item to sell for a large profit. A legal take on this money-making method is flipping thrift shop and flea market buys for cash.

This is the peak of unethical ways to make money, but the average pimp makes between $5,000 to $32,000 a week through advertising services, physical protection, medical expenses, transport, and locations.

On average, pimps manage 5 prostitutes at a time. That being said, pimping almost always has an element of physical and psychological abuse to manage employees.

In America, wait staff takes credit and debit cards away from the table when it is time to pay the bill.

With a skimming machine (which is easy to make if you do not want to buy one on the dark web), this is one of the easiest illegal side hustles.

Selling pirated books like e-textbooks for college, fitness books, finance books, and more has become one of the best illegal side hustles.

All you have to do is search the name of a specific book with “e-book” or “free download” and simply download it. After that, you can list them on Amazon or eBay for less than what they typically sell for.

While this is illegal, the worst that happens is your listing gets removed. With that small a risk, you can make an additional $1,800 a year.

The easiest way to begin committing credit card fraud is by buying a credit card skimmer on the dark web and attaching it to an ATM or vending machine. Once someone inserts their card, their info will be saved by the skimmer.

11. Identity Fraud and the Dark Web

Hackers and scammers can steal personal information for a variety of reasons. After stealing funds from the stolen identity’s bank account, they can sell the identity to the dark web.

There you go! I’ve listed some of the unique and creative illegal side hustle ideas that are happening right now in this modern era! Once again, I’d suggest you be aware and never get involved with any such activities, they are both highly rewarding and risky!